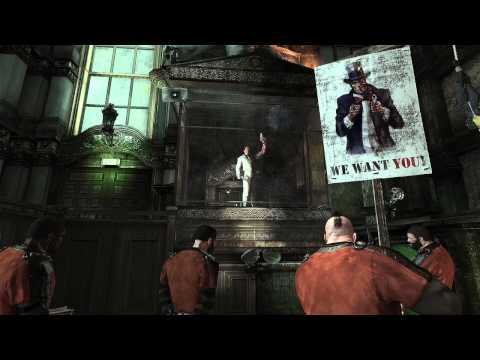 Plot:
Arkham City is a newly constructed prison, housing both the criminally insane and political prisoners alike, in an attempt to condense and control Gotham’s criminal activity.  It provides a “free-for-all” domain for evil doers to exist under surveillance and supervision.  The prison is chaos, and Bruce Wayne is concerned with both the well-being of its inhabitants as well as the safety of Gotham’s people who reside just outside its thick and tall iron fences.  The only way in is for Bruce Wayne to have himself incarcerated.  Shortly after entering into the prison-city, a riot breaks out, allowing Bruce to escape and roam the streets of the prison undeterred.  With the help of Alfred, Bruce Wayne rises to the rooftops of Arkham City and becomes Batman, equipped with new gadgets and techniques for fighting the Joker’s menace once again and digging for answers to undermine Gotham’s criminal underworld and most devious social un-doings.

Cultural / Historical Value:
Batman: Arkham City is the follow up to the highly acclaimed title, Batman: Arkham Asylum.  However, it has also been nominated for and won numerous awards in its own right.  Players value the experience of playing as Batman, and new to this title, Catwoman.

Teaching / Learning Characteristics:
This game was a much anticipated title.  It lived up to its hype by delivering detailed graphics, an intricate plot, and a deeply immersive environment.  Gamers are given a city to explore where they encounter numerous villains along the way.  Due to its successful design and implementation, game developers can look to this title for an example of balanced gameplay, storytelling and how to deliver an overall entertaining game experience.  Like its predecessor, playing Batman: Arkham City simulates what it’s like to be Batman.  One must learn and appreciate new approaches to stealth, surveillance, sleuth, intuition, and cunning to succeed at this game.

Replay Value:
This game is highly entertaining and lends itself to repeat playing due to the numerous difficulty levels and side-missions that exist outside of the main storyline.  There is also downloadable content available that will give this title added length.

Likely Audiences:
Like its predecessor, Batman: Arkham City is intended for mature gameplayers only due to the at-times frightening plot and implied violence.  Although Batman does not carry a gun, his opponents do – they are motivated killers and criminals by nature and will stop at nothing to see Batman fail.  All gamers that have tried Batman: Arkham Asylum will love and value Batman: Arkham City.  However, even those not familiar with the previous title who enjoy other action-adventure / fighting / stealth games will find much to appreciate in this title.