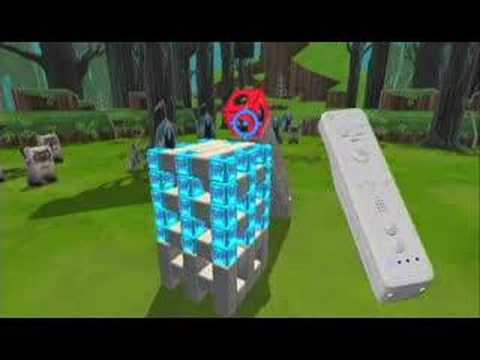 Date of Review:  May 29, 2012
Format Reviewed:   Wii
Language / Country of Origin:   English / USA
Single or Multi-Player:  Single- and multi-player (up to 4 players).  Both cooperative and versus options.
Online capability:  Players can create their own levels/boards and post them online via WiiConnect24.
Prequels:None.
Sequels: Boom Blox Bash Party
Equipment Needed: None
Maintenance Required:  None

Plot:
Boom Blox is a casual, physics-based puzzle game that lacks a single, distinct plot.  However, the game’s goal is to either knock down structures built of blocks or ensure that they remain intact.  The game utilizes a realistic physics model that allows the Wii to determine the angle and speed of projectiles (baseballs, bowling balls, etc.) being thrown as well as the force and direction with which blocks are being pushed or pulled.  There are different kinds of blocks involved, including regular wood blocks, point blocks (worth varying numbers of points), bomb blocks (that explode when hit), vanishing blocks (that vanish when hit), and chemical blocks (that explode when they touch another one of their kind).  To advance through different levels, players might have to target weak points in structures, set off a chain reaction of explosions, or pull out blocks without toppling a tower (similar to Jenga) – usually with either turn or time constraints.

The game features different modes of play: Adventure, Explore, Party, and Create. Both the Adventure and Explore modes are single-player.  Adventure mode is essentially story-based and takes players through various scenarios, including defending some sheep from monkey attacks to clearing paths for a mother to get to her babies.  There are four distinct themed worlds: Gem Kingdom (which takes place in medieval times), Gorilda Rescue (which takes place in a jungle), Boots ‘n’ Bandits (which takes place in the Old West), and Haunted Night (which takes place on Halloween).  Explore mode is strictly puzzle based and highlights the different techniques that players will have to learn to succeed at the game.  Between these two modes, there are over 300 levels.  Each level has three separate challenges, represented by medals: bronze, silver, and gold.  Gold is the hardest to attain, but bronze will allow the player to progress to the next level.  The Party mode contains the cooperative and competitive multiplayer levels (of which there are 100).  Up to four people can play at each time, building and/or destroying structures.  Finally, Create mode allows players to build new levels or alter existing ones – either single- or multi-player.  The levels are built with different structures that were unlocked and collected via the single-player modes.  Once a level is created, it can be played or uploaded via WiiConnect24.

Cultural / Historical Value:
Boom Blox was the first game released for the Wii with Stephen Spielberg (director of Jaws, ET: The Extra-Terrestrial, and Shindler’s List) as designer.  The game was both critically and commercially successful and was nominated for and won several awards.  Critics praised the title for its good use of three-dimensional space and its motion controls that can sense position, angle and speed.  Some people lamented the lack of a solid plot and the childish characterization, but overall the title was well received.

Teaching / Learning Characteristics:
The game uses the Wii’s motion sensors and accelerometer to calculate the position of the cursor, the angle, speed and velocity of throws, and the force with which you push or pull blocks.  The physics are quite accurate and realistic, teaching players the effects their actions have in the game environment.  Players will learn some physics without even realizing it.

Replay Value:
The game has a very high replay value.  There are over 300 single-player levels that have an associated medal system (bronze, silver, and gold).   This system will tempt players to keep replaying levels because although attaining bronze does not take much thought, gold requires a lot of experimentation and planning.  The large number (over 100) and variety of multiplayer levels (since there are both cooperative and competitive ones) also adds to the replayability of the title.  Finally, allowing users to create their own levels and post them online adds depth to the game.

Likely Audiences:
Boom Blox definitely had a casual gaming crowd and kids in mind when it was developed.  Further, since it a classic puzzle title, it lacks a deep storyline and plot.  All of the above might put off hardcore gamers.  However, despite this, it is a great party title, due to the variety and depth of its multi-player options.