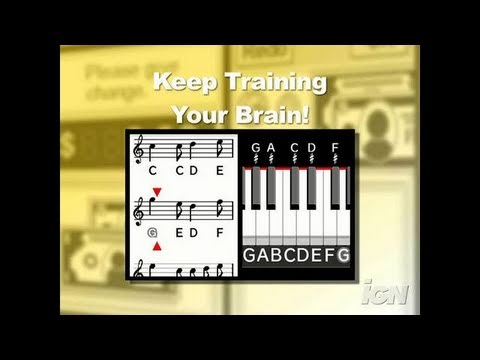 Date of Review:  April 20, 2012
Format Reviewed:   DS
Language / Country of Origin:   English / USA
Single or Multi-Player:  Single- and multi-player.  Up to 16 players (using one copy of the game) can compete against one another via Download Play or over the wireless network.
Online Capability:  See above.
Prequels: Brain Age: Train Your Brain in Minutes a Day!
Equipment Needed: DS or 3DS.
Maintenance Required:  None required.

Plot:
Brain Age 2 is a series of short puzzle games, compiled to measure the responsiveness of a person’s brain.  Players are tested on how quickly and accurately they can complete different tasks.  When the game is first started, players are made to take three random tests – to determine the age of a player’s brain.  Brain ages are measured on a scale of 20 to 80, with 20 being the desired result. Once an initial brain age test has been completed, three new training modes are unlocked: Quick Play, Daily Training and Sudoku.

Quick Play lets players practice without generating a score whereas Daily Training plots players’ attempts on a graph (but only the first attempt every day).  Daily Training is a mixture of individual training games and the Brain Age Check.  A fun extra that is also included in the Daily Training interface is a Dr. Mario clone called Virus Buster, meant to help players relax.

The training games available are:

Separate from these games are 100 different Sudoku puzzles, ranging in difficulty from Easy to Hard.

Cultural / Historical Value:
Brain Age 2 is a relatively popular title that received decent reviews from professional critics and gamers alike.  This game was one of the first of its kind in terms of brain training titles.  It has been the focus of several academic studies that examined the efficacy of brain training games on increasing cognitive function.  The game has been popular with young and old alike, with many seniors claiming they use it to keep their brains sharp.

Teaching / Learning Characteristics:
Although numerous scientific studies have aimed to test the effectiveness of this game (and other brain training programs), so far the data has been inconclusive.  However, despite the lack of formal evidence, Brain Age 2 can teach players how to become better puzzle solvers.  Along the way, it can therefore help them advance their logic skills and stimulate their memory.

Replay Value:
This game has a high replay value, due to the fact that players will want to keep playing to increase their score, or rather, decrease their brain age.  All training games graph each player’s progress, showing their performance over time and enticing them to continue to train their brains.  New games/training programs are unlocked as players collect stamps.  Only one stamp can be unlocked per day and locked programs show up on the screen – again tempting gamers to keep at their daily training.  It should be noted that there are issues with the voice recognition that could discourage players from wanting to partake in games requiring voice cues.  Yet, there are enough games that do not use the voice recognition software to keep players going for a long time.

Likely Audiences:
Brain Age 2 is appropriate for all ages and can be enjoyed by everyone.  Puzzle enthusiasts and casual gamers in particular will find much to like about this game.  Overall, anyone looking to increase their mental acuity and give their brain a workout should give this title a gander.