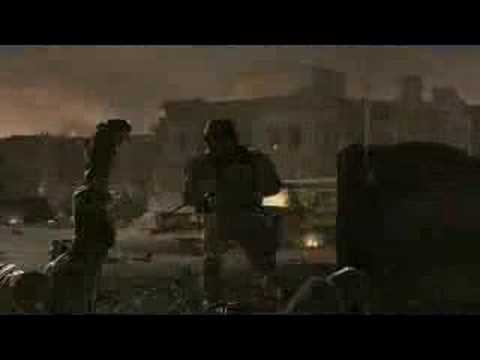 Plot:
Designed to reflect the realities of present day warfare, Call of Duty 4: Modern Warfare is a fictional storyline about a nuclear entanglement between the United States, Great Britain, Russia, and an un-named “Middle Eastern” country.  When Great Britain discovers that the Russian Ultranationalist Party is utilizing a rebel faction in the Middle East to create pandemonium for political gains, the American government is called in to police the situation.

Cultural / Historical Value:
This game is part of the critically acclaimed Call of Duty series.  Like the other titles in the series, the game simulates war.  However, this title moved away from World War II and focuses on modern conflicts.  Interestingly, the game has been used to train soldiers for actual combat.  Call of Duty 4: Modern Warfare was immensely popular (it sold the most copies of any game in 2007) and critically acclaimed (being nominated for and winning several game of the year awards).  People praised the games groundbreaking achievements in graphics and gameplay.  Many also applauded the plot, which was written so as to depict present-day combat without offending the world’s geo-political mindset.

Teaching / Learning Characteristics:
Call of Duty 4: Modern Warfare was not necessarily built with teaching and learning characteristics in mind.  However, the military has used the game to instruct soldiers in battle – as it accurately simulates present-day technology-based warfare.  The multiplayer also offers some opportunities for learning, as to be successful in team-based campaigns, players must know how to manage numerous people to form a cohesive team.  This can be a quick gauge as to how strong people are as leaders or followers as you often play against strangers and have to quickly assign specific roles.

Replay Value:
The single-player storyline can be competed fairly quickly and therefore, does not have high replayability.  However, the true replay value lies in the title’s online multiplayer modes.  Players can level up by gaining experience points in the multiplayer sessions, which in turn, lead to new challenges and weapon upgrades.  Both competitive and cooperative (team-based) multiplayer games exist.

Likely Audiences:
People who like other games in the Call of Duty series.  People who like first-person shooter games.  Fans of online multiplayer titles.  Like with most M-rated titles, those who dislike gory material and graphic content should stay away.  The depiction of war is very realistic and not for everybody.