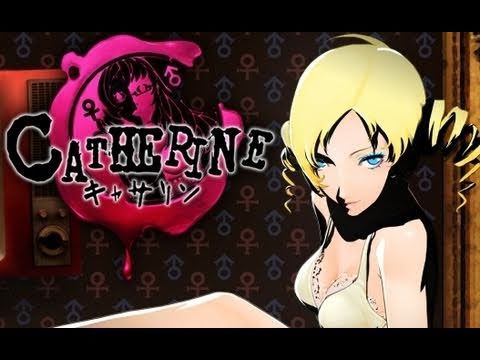 Date of Review:  October 15, 2012
Format Reviewed:   Xbox 360
Language / Country of Origin:   English / USA
Single or Multi-Player:  Single- and Multi-Player.  In addition to the main storyline, there are two additional local two-player modes: Babel Mode and Colosseum Mode.
Online Capability:  Player’s responses to in-game questions are loaded into an online database.  Collective responses are displayed in the game if players are connected to the internet.
Equipment Needed: None needed.
Maintenance Required:  None required.

Plot:
Catherine is about a man named Vincent Brooks who is trying to choose what direction his life will take – is he ready to settle down, get married, and start a family? Or does he choose a path free of commitment and fidelity?

Throughout the course of the game, Vincent is forced to make a decision.  He must choose between his girlfriend of many years, Katherine McBride (Katherine with a “K”), who is pressuring him to get married and a beautiful, young, feisty blond named Catherine (Catherine with a “C”) who he meets at his local bar (the Stray Sheep) and starts having an affair with.  After meeting Catherine, Vincent starts having terrible nightmares – in which he, along with many anthropomorphic sheep, must navigate a tower of blocks that is full of traps and continually falling apart to reach the top.  Once there, he is forced to answer moral and ethical questions on topics related to relationship issues like personal responsibility, trustworthiness, and monogamy.  His answers affect the outcome of the game.   When Vincent is not trapped in the nightmare realm, he spends his time in the Stray Sheep drinking with his buddies, texting Katherine and Catherine, playing an arcade game called Rapunzel, and conversing with bar patrons.  Vincent’s interactions with people while he is the bar eventually impact the game’s ending.  All of his choices are important.  The main storyline lasts for approximately a week of in-game time, with the same pattern repeating each day – Vincent spends time at the Stray Sheep until he falls asleep and descends into his terrifying nightmares.

The faster that players solve the nightmare puzzles, the more points they are awarded.  Various amounts of points yield different medals (gold, silver, or bronze).  These medals unlock other game modes – separate from the main single-player storyline.  The puzzles are not simple (even on the easiest setting), so being awarded with gold medals is an achievement.  There are several items which can also aid a player’s ascent to the top – such as spare blocks, lightning (to remove enemies), and energy drinks (that allow Vincent to climb multiple blocks at a time).  Of course, it should be mentioned that if Vincent dies within a nightmare level, he also dies in “real life”.

Cultural / Historical Value:
When it was released, Catherine was the highest selling title at launch for its developer, Atlus.  It received generally positive reviews, with critics praising its unique gameplay – stating that the combination of puzzle solving and RPG-like decision making was something that gamers had never seen before. The themes explored in Catherine are not those of typical videogame fodder, as it touches on issues related to relationship fidelity, personal responsibility, honesty and trust.  Although Catherine has not won any awards from the traditional award givers, it won and was nominated for various awards from individual gaming websites, like GameSpot, IGN and 1UP.com.

Teaching / Learning Characteristics:
Catherine’s ending changes based on the choices that players make within the game.  Therefore, players can explore and learn about their own morality through the title.  The game can also be used to test their spatial reasoning skills as the puzzles are sometimes infuriatingly difficult (compounded by insufficient camera control).

Replay Value:
This game has relatively high replay value as the choices that players make impact the game’s trajectory and conclusion.  The ways that the moral/ethical questions are answered and how the player (as Vincent) responds to and interacts with various characters all affect what happens later on in the plot.  There are eight different endings that can arise based on a player’s choices.  Further, players are awarded medals based on how quickly they complete the in-game puzzles (with gold being the highest award).  Finishing puzzles with gold medals unlocks other stages and game modes – adding to the titles replayability.  Overall, there are three game modes: Golden Playhouse (the main single-player mode), Babel (a multiplayer mode that has to be unlocked), and Colosseum (a multiplayer mode that has to be unlocked).

Likely Audiences:
Puzzle enthusiasts will find much to enjoy about this game, as playing it on anything above the easiest level is often infuriating.  Those who are into anime will also likely enjoy this game as it is built around anime-influenced animation and storytelling.  Anyone curious about what an “adult-themed” mature game is all about should pick up this title as are those who want to test their own ethics and morality.  All that being said, this is probably not a game for young kids.  Although there are no graphic sex scenes, sex is frequently discussed and implied.