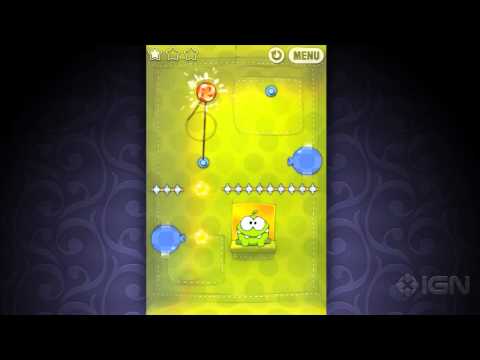 Plot:
Cut The Rope is a game without much of a backstory or a plot.  Basically, the goal is to feed a cartoon monster named Om Nom candy.  Om Nom sits at the bottom of the screen while the candy that he desires is held dangling from ropes at the top of the screen.  In order to get the candy to Om Nom, players must maneuver through various obstacles (spikes, spiders, etc.).  Although the basic goal is to get the candy into Om Nom’s mouth, players can also try to earn stars.  There are a maximum three stars per level.  The more stars collected, the faster players unlock new boards/levels in the game.

Cultural / Historical Value:
The iPhone version of this game has been downloaded over 60 million times, making it an immensely popular title.  It is well-known for being both fun and addictive.

Teaching / Learning Characteristics:
While it is true that Cut The Rope is not incredibly intellectually taxing, it does force players to think about physics.  Gravity is a big part of Cut The Rope.  In order to correctly solve puzzles, players must consider how gravity will affect objects that are pulled, pushed and dropped.  Despite the simple concept, the game requires strategizing – to know how and when to cut the rope so that the candy falls directly into Om Nom’s mouth.

Replay Value:
Although it is fairly easy to get through all of the levels of Cut The Rope, it is not quite so simple to retrieve the maximum number of stars each time.  Achieving a perfect score on each level requires careful planning.  Due to the challenge involved, the game is very addicting and there is high replay value.  Further, the achievements and awards (“pictures” of games) that can be unlocked increase the life of the title by enticing players into completing certain tasks.

Likely Audiences:
Cut The Rope is a game that can be enjoyed by everyone, although it might appeal more to those looking for a casual gaming experience.  However, anyone looking for a fun, but not necessarily easy game, will enjoy this title.