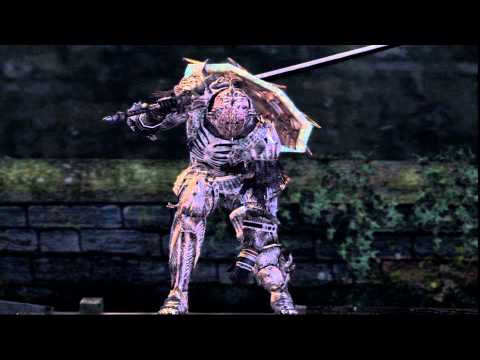 Plot:
The primordial world of Dark Souls was ruled by dragons. With the birth of fire, the dragons were driven from this world, and humanity took hold in the Age of Fire. The power of this ancient fire is beginning to wane, and the gathering darkness has created a legion of Undead who languish in growing insanity as the Hollow. You are the chosen Undead who has escaped from the Undead Asylum to make a pilgrimage to the kingdom of Lodran and rekindle the fire.

Gameplay:
The player explores a dark and hostile fantasy world filled with grotesque monsters and dangerous eccentrics. Progress through the game is nonlinear, but exploration is simultaneously encouraged and punished in a sprawling environment littered with treasure, traps, and formidable bosses. Progress is hard-won, and mistakes are punished severely.

The souls of defeated enemies serve as the game’s currency, and they can be traded for character and equipment upgrades at the bonfires scattered throughout the environment. If the player dies, he or she resurrects at the nearest bonfire, but all of the slain enemies in the area resurrect as well. The player can recover the lost souls from the bloodstain marking his or her most recent death, but these souls are lost if the player dies en route to the bloodstain. Thus, the game’s most precious commodity is also its most precarious, giving the game a pervasive tension.

Cultural / Historical Value:
Dark Souls has received critical acclaim for bringing uncompromising challenge back to a gaming industry that caters to a wider audience at the expense of the hardcore niche.

Teaching / Learning Characteristics:
Death is inevitable in such a difficult game, but it is never the end. Through skill, perseverance, and a willingness to learn from his or her many mistakes, the player can conquer every obstacle in this grim, uncompromising world. One must by wary of other players, but one must also rely on them to progress.

Replay Value:
Since the player’s character is highly customizable, the game can be replayed using a variety of character builds and techniques. The game can also be replayed in New Game Plus mode, in which the already considerable difficulty is increased to a nightmarish level.

About the Author:
Brendan Themes is human-computer interaction designer who lives in St. Paul, MN. He enjoys playing games and making music.