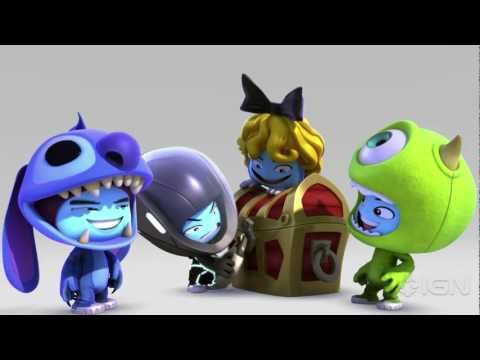 Review:
Disney Universe is a cute take on the usual movie franchise and offers up plenty of platforming and puzzling to please. The game is made up of six themed worlds that loosely follow the Aladdin, Alice in Wonderland, Lion King, Pirates of the Caribbean, Monsters, Inc. and WALL-E movies.

With each new level, your little munchkin avatar is provided with the opportunity to “suit up” in the garb of a favorite Disney character, even ones not represented by a world in the game. It’s downright adorable to watch kiddie versions of classic characters romp around, move objects, solve puzzles, partake in mini-games, beat up baddies and more. When you want to wear a new costume or unlock a different set of levels, simply spend some of your gathered coinage.

Graphically, Disney Universe looks good. The game also does a decent job of mixing new and old gameplay elements from world to world, and some of the puzzles are rather clever (rerouting a rollercoaster so a silver ball can pass through, for example). It’s a fun game to play alone or with friends and has tons of replay value due to all the outfits you need to master and collectables there are to amass.

Plot:
You get transported into a computerized universe overrun with baddies, both big and small, that are determined to sabotage your fun.

Cultural / Historical Value:
This game is inspired by many popular Disney franchises.  It was nominated for the 2012 Golden Trailer Award (Best Pre-show Theatrical Advertising).

Teaching / Learning Characteristics:
Every single level in every single world has several puzzles to solve.  Therefore, gamers problem solving abilities will be tested.

Replay Value:
You’ll need to play through each level multiple times when going for all of the achievements.