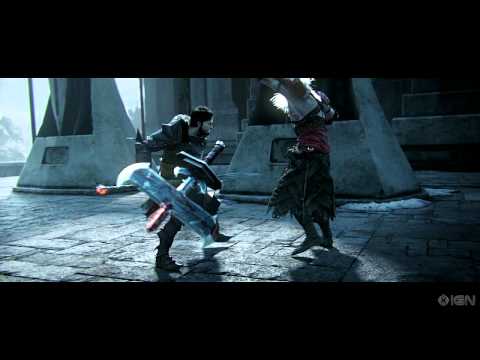 Plot:
Dragon Age II coincides with the events of Dragon Age: Origins.  You are Hawke, a refugee from the country of Ferelden, who is fleeing to safety to Kirkwall, a town across the Waking Sea from Ferelden.  Hawke arrives at Kirkwall, having endured attacks from the Darkspawn, demons who have spread terror across the entire realm of Thedas (of which Ferelden is a part).   The city of Kirkwall is crowded with refugees, but with the help of friends Hawke will manage to rise up from anonymity and poverty to lead Kirkwall’s defenses and help to save Thedas from the Darkspawn Scourge.

Cultural / Historical Value:
Dragon Age II is the second installment of the Dragon Age series.  The title received very mixed reviews, with critics mostly praising it while fans of the series disapproved of the new direction and gameplay – citing unfocused storytelling and an oversimplified combat system.  Despite this, Dragon Age II was nominated for numerous awards.

Teaching / Learning Characteristics:
Like its prequel, Dragon Age II has little educational value for the regular gamer.  Just like Dragon Age: Origins, it does however simulate the effects of moral decision making – allowing players to determine their fate by the choices they make throughout the course of the game.  Dragon Age II offers challenging moral codes to crack.  Game designers should take note not to alter parts of games that work for their established fan base.

Replay Value:
Dragon Age II is less dynamic than Dragon Age: Origins.  The player is unable to choose from multiple characters and is destined to play solely as Hawke (although they can choose Hawke’s gender).  The player can choose Hawke’s disposition and talents, however, ranging from mage to warrior to rogue.  Dragon Age II has a linear plot that is told in three segments, but ends differently each time depending on the choices the character makes throughout the chapters of the game.  This gives the game replayability.

Likely Audiences:
Fans of Dragon Age: Origins may or may not like the game, as there are few similarities.  The complex plot found in Dragon Age: Origins is missing and the combat system was substantially changed.  However, the title still fits within the fantasy genre and the Dragon Age franchise.  Fans of these may still want to give this game a look.