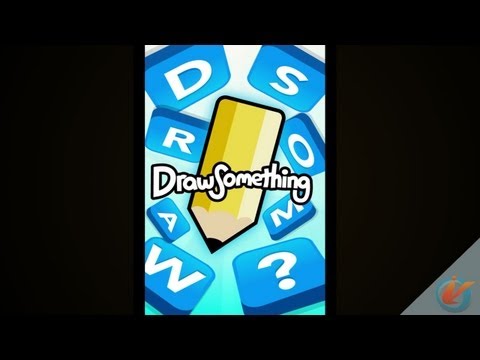 Date of Review:  April 24, 2012
Format Reviewed:   iOS
Language / Country of Origin:  English / USA
Single or Multi-Player:  Single-player.  Played against either friends or random strangers.
Online capability:  None
Prequel/Sequel: N/A
Equipment Needed: None needed, except for mobile device.
Maintenance Required:  None required, although there may be periodic game updates that should be installed.

Plot:
As Draw Something is a casual social game, there is little plot to speak of.  Essentially, the game consists of one player choosing a word clue from a list of options and then drawing that clue for their friend/partner/opponent, who has to guess what the original clue was, given a random assortment of letters.  In-game coins are earned each time a clue is correctly guessed from a drawing.  The greater the difficulty of a clue, the more coins are earned.  Clues are worth one, two or three coins.

Earning coins is important because they can be used to buy either additional colors (each player only starts with four basic colors: blue, black, red, and yellow) or bombs (which either eliminate incorrect letters when guessing clues or allow players to generate new clues if they do not like their options).  The advantage to buying the paid version is players immediately start out with enough coins to purchase new colors and bombs, if they so choose.

The game links directly to Facebook so that players can play with/against their friends.  Alternatively, they can also choose to play against random strangers.

Cultural / historical value:
Draw Something was somewhat of a cultural phenomenon.  Within weeks of its release on mobile platforms, it had been downloaded over 50 million times, prompting Zynga (a major social gaming company) to purchase the game itself as well as the game’s development company.  It is widely known for its simple but highly entertaining gameplay.

Teaching / learning characteristics:
This title is primarily for entertainment.  However, gamers are challenged to think visually and represent their thoughts in an easily understandable sketch.  In that sense, Draw Something can help budding artists hone their skills.  Game developers can also look to the title for its clear crisp design and simple gameplay and interface.

Replay value:
When Draw Something was first released, it was possible (if the game was played enough) to see clues repeated over and over again.  However, the developers have since added new content and will likely keep doing so over time – giving the game added replay value.  Also, since players can choose the difficulty level of their clue, they can avoid drawing the same topic repeatedly.  The option to play against random strangers also adds to the replay value because even if a player’s friends are slow at taking their turn, there is always the option to find a willing stranger ready to play the game.

Likely audiences:
Everyone.  In particular, this game will be enjoyed by those who are fond of games like Pictionary or those who are themselves artistic and like sketching.  The clues that players must choose from are occasionally topical and may not mean anything to those not engaged with current pop culture.  However, there are always three options that can be chosen and these kinds of clues can be avoided.