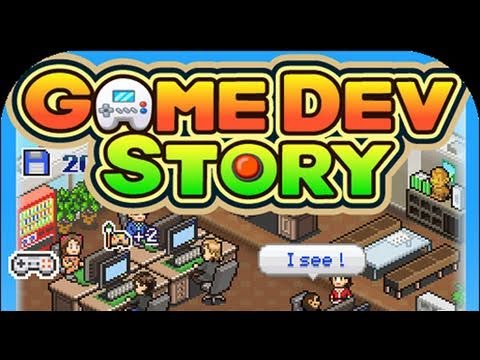 Plot:
Game Dev Story is a simulation game that allows players to create their own videogame studio and develop various genres of games .  The goal of the game is to sell millions of copies and receive the adoration of critics.

Players can choose which aspects of a game to focus on in development, such as cuteness, approachability, realism or innovation and can pick the genre (simulation, shooter, RPG, etc.) and theme (robot, pirate, historical, etc.).  In order to create hype for the game, earn more fans, and eventually lead to more sales, players can also spend money on advertising and attending trade shows.  In the role of president/CEO of the company, players also decide who to hire and who to assign to certain tasks.  You can choose to either do all of your development in house or you can outsource (which gives you access to people with higher qualifications, but at a large cost).  At the beginning of the game, you can only hire low-level employees (inexperienced coders and developers), but as you gain more success, you get access to talented artists, sound engineers, writers, and directors.  There are two types of currency earned in the game: cold hard cash and “research points”.  The latter can be used to help develop your staff’s skills – so that they can help produce better, higher quality games.  Apart from the general goals of appeasing critics and selling games, there are various different objectives to meet, such as making a game that is inducted into the hall of fame and producing a sequel to one of your games.

The game acknowledges the real videogame industry in many ways –  in the types of consoles that you can develop for (Playstatus, Intendro, etc.), the names of the employees that you can hire (Gilly Bates, Ann Deroid, etc.) , and the genres of games that are instantly successful (robot shooters, for example).

Teaching / Learning Characteristics:
Players can learn a lot about the game industry from this title.  For example, small time developers do struggle to sell games and have to focus on PC titles as they are the only ones without outrageous licensing fees.  Developers also must adhere to known market trends in order to produce top selling games.  Players can also watch their fan base drop if they don’t consistently produce high-quality, best selling games.

Replay Value:
Despite fairly repetitive gameplay, this game is very addictive.  Players will want to keep playing in order to create better critically acclaimed, best-selling titles.  The game stops keeping track of your score after 20 years – effectively pushing players to start over and see if they can beat their high score.  On that note, players can connect to Game Center to watch the leaderboards and compete for high scores.  There are also achievements to be earned after certain tasks are completed – again adding to the replayability of the title.

Likely Audiences:
People in the game industry or those looking to enter it will probably be interested in this title since it focuses so heavily on these concepts.  It probably will not appeal as greatly to those who aren’t familiar with the ins and outs of the industry.  Simulation fans and those looking for a simple addictive handheld game – as long as they are willing to look past a lot of puns about gamers and videogames – may also enjoy Game Dev Story.