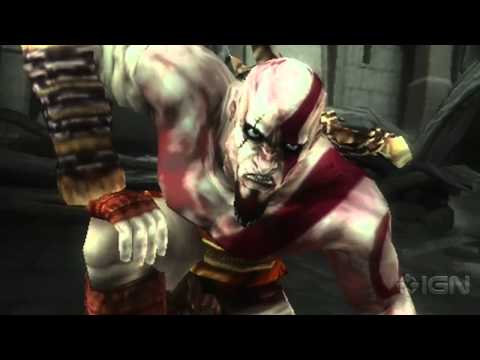 Plot:
In ancient Greece, Kratos’ malign dissatisfaction with the gods began at an early age when his brother was kidnapped by Ares one afternoon while they were playing.  An Oracle had prophesied that Olympus would fall, not by the Titans, but by a marked warrior.  Kratos’ brother, Deimos, was widely known for his unusual birthmarks. Because Deimos bore the trait of the prophecy that would destroy Olympus, Ares kidnapped the child, and brought him to Death’s Domain where he remained the prisoner of Thanatos, a demonic personification of death, for all his life. To honor his stolen brother, Kratos tattooed his body with red ink to re-create his brother’s birthmark on his own skin.

By the time the events of God of War: Ghost of Sparta commence, Kratos has defeated Ares and is the new God of War.  Haunted by the visions of his mortal past along with visions of his surviving mother, he sets sail to Atlantis in the hope of finding some answers.  There, in the Temple of Poseidon, Kratos is re-united with his mother who beseeches him to pursue Deimos in Sparta — whereby she transforms into a hideous monster that Kratos must slay.  Forlorn and heart-broken by the fate of his mother, Kratos begins his journey to locate his brother in Sparta.

Teaching / Learning Characteristics:
God of War: Ghost of Sparta can teach players very similar things to what the rest of the games in the God of War series can: hand-eye coordination, puzzle solving, and a simple understanding of Greek mythology.  The game is fairly fast paced and requires that players can react to being bombarded by enemies.  Further, in order to complete the game, various puzzles have to be solved – helping the player develop their critical thinking skills.  Finally, because the game is set within ancient Greece and draws heavily on Greek mythology, players can learn a little bit about this historical timeframe.  However, one must be aware that although the game draws heavily on these ideas, it is not completely historically accurate – especially as the main protagonist, Kratos, is completely fictional.

Replay Value:
Just like the other PSP God of War game, God of War: Chains of Olympus, God of War: Ghost of Sparta has three difficulty settings: easy, medium and hard.  Upon completing the game, a “god mode” is made available, creating a “very hard” difficulty setting.  Therefore, players can try to complete the game on various settings.  Finishing the game also unlocks a mode called “the challenge of the gods,” where both Ares and Athena challenge Kratos to complete various stages.  The game also has a combat arena where players can pick an adversary and choose the difficulty setting for the fight.  Finally, there is another unlockable mode called, “the challenge of Zeus,” where players can get new costumes, watch behind-the-scenes videos, and view art galleries depicting the various characters and artifacts found throughout the game.

With all of these additional features, God of War: Ghost of Sparta has high replay value.

Likely Audiences:
This game is obviously going to be enjoyed by players who liked other games in the God of War series.  People who enjoy third person, gory, action packed, hack and slash games should try this title.  Anyone who has more than a passing interest in Greek mythology might enjoy this game as well.  Those who are averse to blood, guts and decapitation in their videogames should probably give this title a pass.