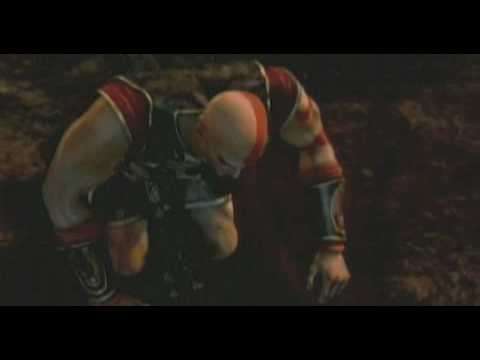 Plot:
God of War is based on Greek mythology and the Gods of Olympus.  The story follows Kratos, a Spartan warrior, who becomes bound in servitude to Ares, the God of War.  Kratos was on the verge of death in battle with a barbarian army when he asks Ares for help.  Ares aids Kratos in defeating the army, but then binds chains with blades to his body as a reminder that he owes Ares for his life.  Later, Kratos commences a larger war against Greece and watches his family die due to Ares deliberately placing them in the middle of a confrontation within a town that he is attacking.  Despite his personal loss, Kratos wins the battle and is cursed by the defeated town’s oracle.  His family’s ashes are now fused to his skin, turning him ash white, and deeming him the Ghost of Sparta.  Devastated by the loss of his wife and daughter, Kratos renounces his allegiance to Ares and instead pledges his services to the other Gods of Olympus.   The Goddess Athena promises Kratos freedom from servitude if he murders Ares.

Cultural / Historical Value:
God of War was both commercially and critically well received.  People commended the title’s intricate plot, vivid graphics and exciting gameplay.   Many critics praised it as the best action game ever made on the PlayStation 2, and as such, it won numerous “Game of the Year” awards. In recent years, the game has been turned into a novel and a film adaptation is in the works.

Teaching / Learning Characteristics:
Although it does not adhere to classic storylines, God of War brings to life at least a dozen characters familiar to Greek mythology.  Players can learn about the various Gods while playing the game.

Replay Value:
God of War has various difficulty levels.  If the game is beaten in each of these levels, bonus content is unlocked.  Some mini-games are also hidden within the main game’s plot.  Each of these features gives the game moderate replayability.

Likely audiences:
Players interested in Greek mythology should definitely give this title a look.  However, they should note that it is intensely violent and gory.  Obviously, fans of the later God of War games would enjoy this game, the first in the God of War series.  This is not a game for the casual gamer, as it features challenging gameplay and difficult puzzles.