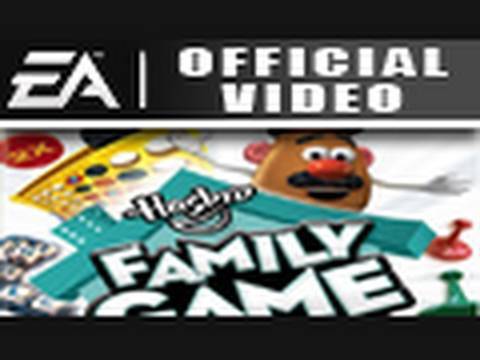 Review:
Hasbro Family Game Night 4: The Game Show is a small collection of mini activities, each with a board game theme. The main game loosely plays like a game show, requiring you to compete in all five mini-games in one go. After each mini-game, the winner earns a card with a mystery amount of play money attached (kind of like a Life tile). At the end of all the games, these Crazy Cash cards get inserted into an ATM and tallied, so it’s entirely possibly to come out on top even if you won less mini-games compared to your opponent.

The five small games FGN4 contains are easy to play and are all slight variations on a board game theme. There’s Yahtzee Bowling, which is pretty much like regular Yahtzee, only you “roll” the dice by knocking down pins and have just a few rounds in which to rack up a high score. Then there’s Connect Four Basketball, which is a fast paced shooting take on regular Connect Four. Also included is Scrabble Flash, where you play with a set amount of letters to try and form long words; Sorry! Sliders, where you attempt to knock your opponent(s) off a bullseye with or without the use of power-ups; and Bop-It Boptigon, which is a hilarious button-pushing memory game.

While the game isn’t horrible, this version of Family Game Night is a sorry disappointment compared to its predecessors. In the previous versions, each included board game rendition was much longer and had more substance…closer to actual full-length board games. This take feels like it should be downloadable content instead of the full price retail game that it is.

Plot:
There is no plot to speak of for this game.

Gameplay:
You play using simple button controls, or you can utilize the Kinect function.

Cultural / Historical Value:
Based on classic family board games such as Scrabble, Sorry! and Yahtzee.

Teaching / Learning Characteristics:
The same sort of teaching elements you would expect from playing the board game equivalent of the games.  For example, Scrabble can help you improve your word-making prowress whereas Connect 4 forces you to strategize many moves in advance in order to beat your opponent.

Replay Value:
This game has poor replay value. With only five quick mini-games, gameplay grows dull rather rapidly. There are a couple of achievements that’ll force you to play through the game many more times than you could ever want.