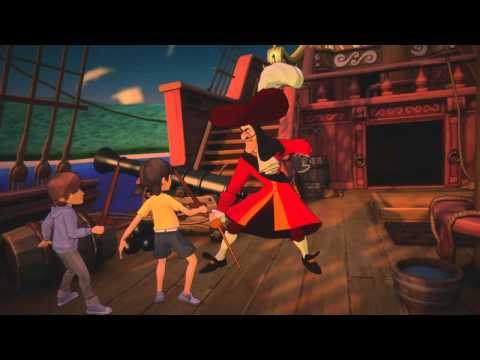 Date of Review: August 2, 2012
Format Reviewed: Xbox 360
Language / Country of Origin: English / USA
Online Capability: None.
Featured Characters: You play as an avatared kiddie version of yourself, but have plenty of meet ‘n greets with all of the beloved Disney characters in-game.
Equipment Needed: Xbox 360 and Kinect sensor.
Maintenance Required: Adequate space is needed to play the game comfortably and accurately. The sensor needs to be positioned at the correct height.

Review:
If you’re on a budget, you can almost skip the yearly trip to Disneyland and just buy this game for your kids instead. This is because the game is modeled precisely after the Anaheim attraction, down to the last detail. The graphics in this game and the experience of walking around the park are about as close as you can get to actually being there in person, and that’s an impressive feat for a video game.

There’s so much to see and do in this game; it’s actually kind of overwhelming when you stop to think about it. Luckily, you can mostly pick and choose what you want to do as you please, whether it’s helping a familiar character like Mickey with one of his many tasks, playing a themed mini-game in one of the several classic rides, or running about using your magical devices to manipulate lamp posts, trash cans and manholes.

The only bad thing about Kinect Disneyland Adventures is that the controls can be kind of frustrating and unresponsive at times. It takes almost as long as it would to walk across the real park to get from one area to another. Even though there are shortcuts that will put you at the entrance of any land, they’re really not all too short thanks to lengthy loading screens and the fact that being warped to the beginning might still require a moderate trek to get to where you need to go. You move by holding an arm outstretched and pointing it in the direction you want to do, which is as inefficient as it sounds.

Fortunately, the amount of effort the developers put into the rest of the game more than makes up for its poor controls. It would require a small essay to list all that there is available to do in Disneyland Adventures, from gathering character autographs to tracking down candied apples in trees, so I’ll just say that it’s a fabulous game for children and even adult fans of Disney.

Plot:
A never-ending, sunny day at Disneyland Park. All of the various famous characters require favors of you.

Gameplay:
You use an outstretched arm to move and your hands to navigate menus. You flick your wrist to make use of the various in-game machines such as a magic wand, fishing rod, etc. A lot of the ride mini-games involve sidestepping. Voice controls are also enabled for some things.

Cultural / Historical Value:
Disneyland is an iconic family attraction with locations across the globe. It’s dubbed “the happiest place on Earth” and for good reason.

Teaching / Learning Characteristics:
Sleuthing skills are required for many of the fetch quests. Following instructions is paramount in this game.

Replay Value:
This is probably the longest game you’ll ever play if you stick with it. Some have estimated that over 100 hours of gameplay is needed if you plan on beating the game 100 percent. The missions are numerous, but it is the countless hours you’ll spend giving the Disney touch to almost every inanimate object in the park that really eats up your time.

Likely Audiences:
Mainly kids, but completionist adults can like it, too