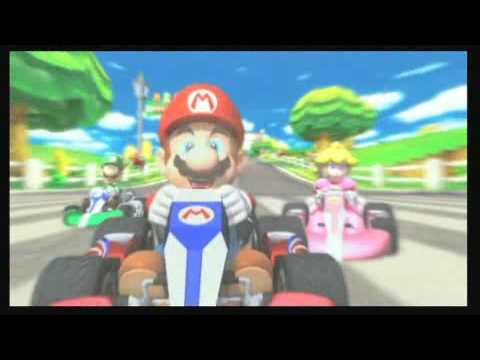 Review:
These aren’t your average ATVs or generic go-karts. In Mario Kart Wii, you race around themed tracks with up to 11 different competitors (most of them familiar characters from the Super Mario Bros. series). Nintendo doesn’t play nice, however, in this karting contest; banana peels, shells and bomb blocks can all be thrown at opponents to trip the competition up.

The main mode is the Grand Prix, where – in true NASCAR style – the goal is to be the first to cross the finish line and be awarded the course cup. Varying kart requirements (like motocross) and different difficulty levels make for 32 unique races in all. You see if you can best Bowser or pummel Peach by playing against computer players in this mode.

It wouldn’t make sense for a racing game to not have an online option; luckily Mario Kart does. If you want to prove your karting skills against real people and not just in-game A.I., this is the place to be. All participants vote on a course they want to run, with the selection going to the world with the most votes. These are not your same old boring stadium track levels, though. Some courses span whole towns, and many of them contain extra obstacles such as holes and traveling Goombas you have to watch out for.

Even if you find yourself in first place in an online race, you shouldn’t stay confident for long. You could easily get knocked back practically to last position if a fellow racer employs one of the various “don’t try this at home” sabotage techniques. There are also good power-ups (such as speed boosts) which can be obtained by driving over an item box. Getting to the good stuff is a matter of musical chairs of sorts, as there are a limited number of boxes per group on the road. Oh, and did I mention that you won’t know what you got (good or bad) until after you’ve picked it up?

Nothing quite beats the experience of steering a plastic wheel midair (if that’s the controller you choose). Whether you’re nine or 99, racing as part of a group or as a couple, you can have fun playing Mario Kart.

Gameplay:
Use the Wiimote buttons to pick races and options; hold the Wii wheel out in front of you as if you were driving a real car to make turns and flick up to perform stunts.

Cultural / Historical Value:
Mario Kart Wii is undoubtedly one of the best games for the innovative Wii console. It’s a classic that appeals even to those who aren’t traditional fans of racing games.  Mario Kart is a classic game that dates back years.

Teaching / Learning Characteristics:
Good sportsmanship is learned when you get pushed back from second to seventh in a race. Skillful and virtual defense driving is needed in order to rank well.

Replay Value:
Tons if you plan on getting gold for all the cups. It’s also good fun seeing how you fare on every racing level online.

Likely Audiences:
Young and old, racing fan or not.