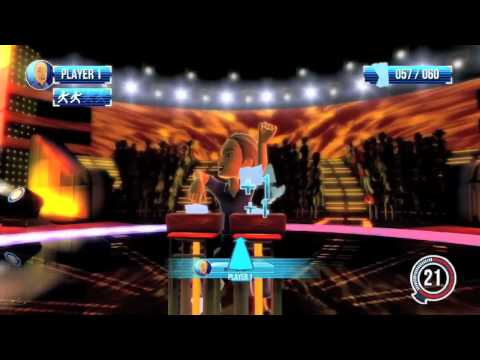 Date of Review: January 26, 2013
Format Reviewed: Xbox 360
Language / Country of Origin: English / United States
Online Capability: None.
Equipment Needed: Xbox 360 and Kinect (along with plenty of room to play the game in)
Maintenance Required: None required.

Review:
This Kinect version of Minute To Win It mirrors the show at every possible juncture. The main game plays just as it would if you were an actual contestant, beginning with less difficult tasks such as pulling all of the Kleenex from a box and working up to the classic million dollar challenge of bouncing a quarter into a tiny jug opening. Granted, these are virtual boxes and jugs and invisible Kleenex and quarters that you’re dealing with. The Kinect tracks your motions and registers your score accordingly.

Like the show’s moniker implies, you only have a minute to beat the challenge at hand. All games are played using digital equivalents of household items and are based on the same kinds of challenges performed on the actual show. Guy Fieri is along for the ride to narrate, and just like on the show, you can walk away at any time to collect your earnings if you fear that you’ll fail an activity.

The problem with Minute To Win It is, because it’s a Kinect game, your progression in the main campaign is based solely on how well your device registers your movements. If you don’t have a lot of space, you may find yourself unable to advance in the game and play new episodes, as these unlock only after beating preceding ones. I wasn’t even able to beat the first episode due to this broken system.

Fortunately there is still the option to play the mini-games individually, and you can earn achievements for getting high scores in these. Having this option is really the one redeeming quality of the game, as it can be enjoyable to challenge yourself in the various tasks (such as catching a marshmallow in a mug or swinging a banana from your belt to knock an orange).

Plot:
There is no plot to speak of.

Gameplay:
You are the controller in this motion based game. You perform actions such as swinging your hands, dodging your head and shaking your limbs frantically in order to score in the various games.

Cultural / Historical Value:
Minute To Win It was a popular recent game show that aired on NBC.

Teaching / Learning Characteristics:
You learn how to best adapt and tweak your movements to perform well in the games.

Replay Value:
Minimal; until you get bored mastering all the games.