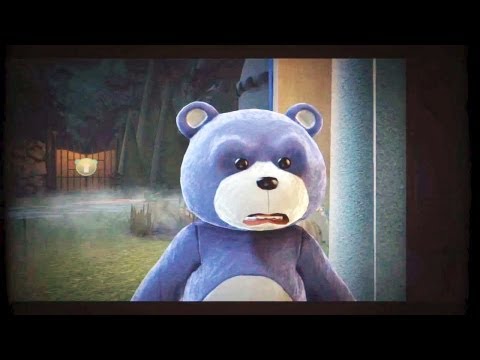 Review:
Naughty Bear: Panic in Paradise is the sequel to the original Naughty Bear game, and despite it being download only, it packs a surprising amount of content. It offers the same devilish fun as the first game, with a few key differences.

As in the last game, the primary objective in PiP is to torture the target teddy bear in a specific way across all 36 levels. This time around, however, you don’t have to worry about performing your hit fast; you can take as long as you need to be cold and calculating and kill creatively. You can wait until the target bear has gone insane before you put him out of his misery, murder him in front of his friends…or both! It’s rather humorous watching the poor chap get eaten by a giant plant, overtaken by a shark or turned into a cookie.

It’s not just the target bear that you’ll want to kill, but every other bear in the level as well if you’re going for one of the medals. New to this version is the ability to steal outfits that you can dress up in as a disguise. Many of them will let you walk right by a bear undetected; the bear will assume you’re his “friend”, and then you can go in for the kill and betray him! Collecting costumes is also important because it’s how you level up and gain experience points.

PiP will keep you busy for countless hours due to the sheer number of items there are to collect/master, the medals there are to obtain, the targets there are to kill, etc. It technically has too much replay value due to how grindy it starts to feel long after you’ve beaten the main campaign. The game has also been known to freeze a lot, which can be frustrating.

Plot:
All the other teddies have gone on holiday and neglected to invite Naughty…again. The only rational thing to do is to crash their parties and inflict revenge, of course!

Gameplay:
You control the camera and movement in open world levels. Simple button controls allow you to attack, pick items up, run, scare bears, set traps and so on.

Cultural / Historical Value:
This is the second game in the Naughty Bear series.  The game was met with almost universal dislike, similar to its predecessor. Critics complained that the game is boring and repetitious.

Teaching / Learning Characteristics:
There is some strategy involved when it comes to stalking the bears and racking up the most points.

Replay Value:
More than you could want in a game… to the degree that it feels like grinding is required.

Likely Audiences:
Adults who like their sadism wrapped in a cute package.  Despite the ESRB rating, this is not kid friendly.