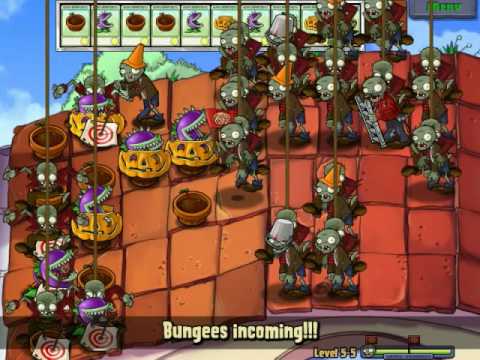 Review:
Your brain isn’t just gray, wrinkled and approximately three pounds – it’s also delicious! In Plants vs. Zombies, there are zombies on your lawn, and they’re not here for a yard sale. You have to take to your garden to fashion weapons out of weeds if your gray matter matters to you at all.

This is a charming tower defense type game. Unlike the usual offerings in this genre, the zombies travel in a straight path across a set block of grass rather than weaving around your defenses in a serpentine manner. Before you can place any plants that pack a punch, however, you usually have to wait for a set of sunflowers to produce golden orbs. These fitting suns are your currency for the game that you use to buy all the weapons, upgrades, etc. Like in any tower defense game, it’s important to have adequate cash flow at all times, so don’t be stingy when it comes to setting up the sunflowers.

Some examples of contraptions you can use to defend your brains include walnut walls, pea shooters, exploding potatoes, catapulting watermelons and spiky welcome mats. The zombies will start to munch on your stuff if they get close enough and aren’t dead yet (even though they are “undead” – you get what I mean). Halloween pumpkins can be used as a protective shell for many of your items; zombies can nibble on these, too, but at least they will buy you some time.

The many different types of zombies and ever-increasing waves of difficulty are what will really keep you on your toes. Some zombies can take a fast track and fly straight to your porch, which gets tricky when you can’t predict which lane they will be coming from, and only a small number of plants are even equipped to deal with airborne monsters. There are also pogo-jumping zombies and swimming zombies.

Plants vs. Zombies is a fantastic strategy game that serves up a serious challenge while still keeping things light. You’ll almost feel bad for blasting the zombies away, as they all seem to have a personality of sorts.

Plot:
The zombie apocalypse is here, and there are dozens of the undead who find your particular brain tempting. Fend them off using seemingly humble plants.

Gameplay:
Use the Xbox controller to position and place defenses, then observe the damage that gets done.

Cultural / Historical Value:
Plants vs. Zombies is another hugely successful, classic game from PopCap. In fact, to date, it’s the top-grossing iPhone launch ever.

Teaching / Learning Characteristics:
Super strategizing is required, especially in the later levels. You have to experiment a lot with the different weapons at your disposal on a limited budget.

Replay Value:
The 360 version comes packed with a bunch of additional zombie themed mini-games (all good fun). This is another PopCap game that’s fun to pick up and play every once in awhile long after you’ve beaten it.

Likely Audiences:
It’s probably too hard for younger kids, but tower defense loving adults will eat it up.