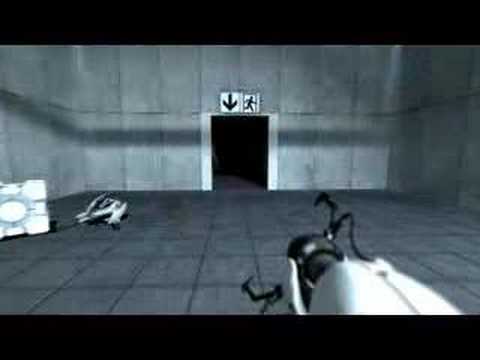 Plot:
Portal follows the trials and tribulations of our hero, Chell, who wakes in an abandoned test facility to the voice of an artificial intelligence called GLaDOS (Genetic Life-form and Disc Operating System.)  GLaDOS informs Chell that she is to perform a series of tests.  Using the portal gun, Chell strives to complete the stages presented to her by GLaDOS and work her way through the facility, the Aperture Science Enrichment Center.  Using her portal gun, Chell can walk, jump or pass objects through portals, allowing her to complete each puzzle.  The portal gun fires two separate rounds, orange and blue, opening either end of a direct portal between its two targets. Therefore, an object that fits and passes through the orange window generated by the portal gun will immediately exit through the blue window with the same direction and velocity. If a person fires two orange windows or two blue windows, the second window created remains as the first one is replaced. You cannot fire any round through an existing window. The portal windows can be created and re-created infinitely so long as the surface they were intended to open upon is conducive to the portal gun.

Cultural / Historical Value:
Portal is the first title in the highly acclaimed Portal series. The game was initially released in a bundled package, The Orange Box with Half-Life: Episode Two and Team Fortress 2, but was later released by itself.  The storyline of Portal is also tied to another well-received game series: Half-Life.  The storyline of Portal is said to take place in-between Half-Life and Half-Life 2.  The Portal games are based off the student-developed videogame, Narbacular Drop, and was created by the same development team at Valve.  Portal has received praise for its unique story and gameplay, soundtrack (particularly the song “Still Alive” written by Jonathan Coulton) and the voice acting of GLaDOS by Ellen McLain.  Some critics, however, were not impressed with the length (or lack thereof) of the game and its sterile graphics.  Nonetheless, the title has won several awards and has sold several million copies as of the writing of this review.  There is a large fan following for the Portal series, prompting Valve to create a range of official merchandise.

Teaching / Learning Characteristics:
Portal is an excellent brain-teaser.  By using the portal gun, the player must experiment with the laws of physics in order to solve the puzzles set forth in this game.  Portal gets a player to think critically on a highly mathematical level, challenging a person’s perspective of time and space.  In order to solve various puzzles, a player uses the portal gun to open two windows that directly interface with each other, forming a portal.  Objects that pass through maintain their inertia in relation to gravity along with velocity and direction.  For instance, large distances can be traversed by placing one end of the portal off a height that Chell can jump into while emerging from the other end of the portal placed on a horizontal surface.  Chell’s inertia from jumping into the entry window is then shifted to give her horizontal flight with respect to the forces of gravity upon emerging from a wall.  The higher a surface Chell jumps from to enter the initial window, the further flight she will achieve while falling from another surface or wall.  Projectiles sent against Chell from weaponry can be re-directed from their impact points to actually hit their sources. Due to the critical thinking, spatial reasoning, logic and mathematical skill involved in solving the puzzles presented in this game, Portal has been promoted as an educational tool by the developer, Valve, for use in scientific and mathematical education.  Portal has also been used in some college classes (such as those at Wabash College) for its use of Erving Goffman’s dramaturgy.

Replay Value:
The game’s puzzles can be completed rather quickly.  However, there are numerous ways to complete each puzzle, which may lure gamer’s into re-playing the title.  Additionally, all versions of the game have achievements that players can strive to complete, adding to the re-playability of the title.  Finally, new modes and challenges are made available when players finish the game for the first time.

Likely Audiences:
Portal will be enjoyed by almost anybody.  One does not have to be a hardcore gamer to become enthralled with Portal.  Although anyone can appreciate the game, those who may be most interested are those who enjoy puzzles and brain teasers and games that challenge critical thinking skills.