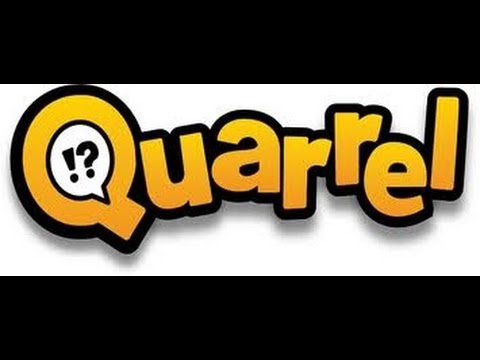 Review:
Quarrel is a quirky Risk-esque game that reminds us to make words…and war. The battles that ensue over who has more volume to their vocabulary are as cute as can be.

The main game pits you against wordy A.I.; some have super Scrabble skills, while others are barely literate. The goal is to take over all the territories and wipe any trace of your fellow spellers from the board. You do this by trying to form the longer, better and faster word in head to head heats. The winner of the word world match cartoonishly beats the opposing team to a pulp (don’t worry – they go to video game heaven), then takes over their turf and claims any men that their team was outnumbered by as their own. One soldier automatically stays behind to place hold the previous area.

What makes Quarrel challenging is that the maximum of eight defenders are not always available for you to spell with. Based on the land setup, you sometimes have to go up against opponents with a man (or two) up on you. You do get rewarded with reinforcements, though, for spelling words that would make Mom proud. Some clever shuffling may be needed to ensure your colored areas are as protected as possible from an opponent’s oncoming onslaught.

The bad thing about this game is that it gets rather boring after a few rounds. You can pretty much get a feel for everything that Quarrel has to offer just by playing the trial. An in-game dictionary containing words of questionable existence is also an issue, and it’s way, way too easy to cheat when playing in virtually any mode (just pause the game and use an Internet anagram tool). If you can abide by the Honors System, though, the cheap price tag of Quarrel might justify a spot in your collection.

Gameplay:
Use the Xbox controller to move your troops, select letters and submit words.

Cultural / Historical Value:
This game has been nominated for several awards.

Teaching / Learning Characteristics:
Big emphasis on spelling and vocabulary. Every word formed comes with a definition at the bottom of the screen, which is handy.

Replay Value:
There are mini marathons, challenges and online content to contend with in addition to the main story mode, but it gets very boring after a few plays.