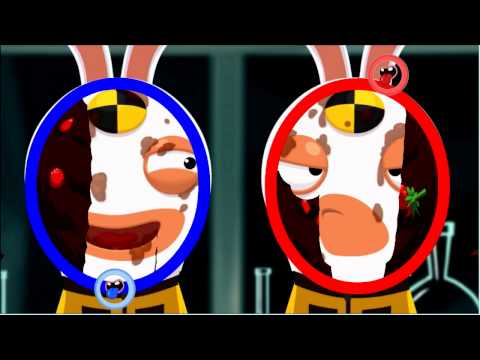 Review:
The Rabbids (kooky alien rabbits that cause mischief) are at it again! This time there’s no storyline, just straight mini-games. The collection consists of dozens of the wackiest, most off-the-wall micro activities around. You can play either on your own in Quick Play, or gather a bunch of friends in Party Mode. Next decide if you want your silliness served up randomly, or you can pick and choose from your favorite games.

Games in Alive & Kicking range from run of the mill (stomping on Rabbids à la Whack a Mole) to the clever (contorting your body into shadows on a shower curtain). Most retain that Rabbids charm and silliness factor (like inflating your bodybuilder muscles or slapping cows). Some games are longer and surprisingly in-depth, such as a Guitar Hero knockoff where you strum notes on an air guitar to redneck hits.

Each game nets you a certain amount of “TP DollarZ” based on your score that can be spent to buy costumes and toys for your very own pet rabbid. You can see yourself onscreen and interact with this rabbid in a sort of free play mode called My Raving Rabbid. The game even encourages you to slap it around!

Because this game consists solely of mini-games, it kind of lacks depth compared to a traditional video game. Some elements are fun, though, so if you can get this one for cheap, it might be worth a few plays.

Plot:
There is no plot to speak of in this game – as it is solely mini-games.

Gameplay:
You play using your body, performing actions such as pointing, clapping, stomping, running in place and contorting.

Cultural / Historical Value:
The Raving Rabbids have been a kooky classic since 2006.  This was the first game in the series for the Kinect and the first that was not available on a Nintendo platform.  Unfortunately, it was also the most negatively reviewed game in the series.

Teaching / Learning Characteristics:
A couple of the mini-games involve memory and trivia so players can test their skills at puzzling.

Replay Value:
Minimal replay value; until you get bored mastering all the games