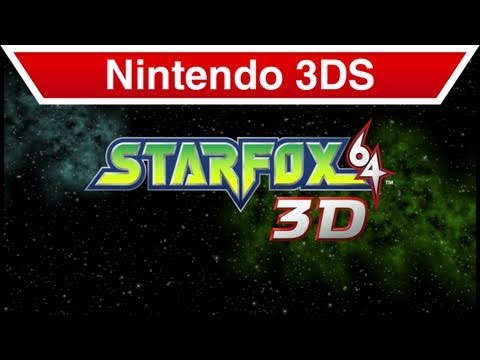 Plot:
Star Fox 64 3D, like the name suggests, is the 3DS remake of the Nintendo 64 game from 1997.  The game takes place in the Lylat solar system.  A long time ago, the evil scientist Andross tried to annihilate his home planet of Corneria and was exiled by General Pepper to a remote part of the universe, the planet Venom.   Angry from his previous defeat and seeking revenge, Andross initiates a new offensive against Pepper’s forces.  Realizing that his army cannot defeat Andross, Pepper recruits some mercenary fighter pilots, the Star Fox team – made up of Fox McCloud, Peppy Hare, Falco Lombardi and Slippy Toad.  Team leader, Fox McCloud has a personal vendetta against Andross as his father, James, was killed on a similar mission several years ago.  In order to protect the Lylat System, Fox and his team must travel across many different planets, all with unique characteristics, battling Andross and his cronies.

Gameplay:
Most of the gameplay consists of the player flying their trusty Arwing (fighter jet), maneuvering through space, battling enemies in the air and collecting rewards.  However, some stages do take place on land, where Fox and his team use hovercrafts to take out Andross’ forces.

Even though this game was completely redone in order to move from the Nintendo 64 to the 3DS, it feels almost exactly the same as its predecessor – despite the cleaner sound and crisper graphics.  Obviously, though, because of the new platform, there were a couple of changes.  Due to the 3DS’ duel screens, the top screen is where all the action takes place, while directions and character interaction/dialogue appears on the lower screen.  The game also has both a “3DS Mode” and a “64 Mode”.  The 3DS Mode utilizes the 3DS’ gyroscopic motion controls – meaning that, for example, you can tilt the 3DS to move right or left or to fly higher or lower.   The 64 Mode disables the gyroscope.  Although for the most part, the player is flying through space, dodging enemy fire and trying to shoot down opponents, there are a few moves that must be mastered: how to set off bombs, brake, barrel roll and quickly accelerate (or boost).  However, all of them are easily learned and intuitive.

Star Fox 64 3D has a total of fifteen different stages, although you only play seven of them during any given game.  Therefore, each time you play the game, it can be unique.  Reaching some of the stages is quite difficult, requiring players to discover alternative paths, down a certain number of enemies or gather a specific amount of silver or gold rings.  Each stage can be completed rather quickly, only necessitating a few minutes – such that the entire game can be completed within an hour.  Unlike the previous incarnation, players can save their progress after every stage.  However, only one game can be saved at a time.

There is very little artificial intelligence present in the game, meaning that enemies appear in the exact same location every single time and players can memorize stages in order to get the highest number of points possible.  If players do well enough and down enough enemies, they will earn medals.  Earning enough medals will eventually unlock the game’s expert level.   Earning these medals is difficult and will engage players for hours on end, if they are motivated.  Therefore, even though the game is fundamentally very simple and easy to play, it can entertain both newer and less skilled gamers as well as those who are more advanced.  There is even an “Easy” difficulty level for those who find the game too frustrating – bestowing the player with the ability to rapidly down enemies and absorb more hits.

Although the main storyline of the game is single player, there is a multiplayer battle mode where up to four local players can compete against one another, using just one game cartridge.

Overall, this version of the game does not offer much new content.  But, it does provide a fun, rewarding experience with a much beloved game of old.

Cultural / Historical Value:
The original version, Star Fox 64, was a very popular title that earned high reviews in its time and this game is an almost exact replica of it.  If you do not have the previous version (or the equipment to play it on) in your collection, this is a good replacement.  However, on its own, this title is neither culturally nor historically important.

Teaching / Learning Characteristics:
Star Fox 64 3D highlights beloved characters from the Star Fox series and brings a beloved, high-caliber game to a new platform.  However, this version does not expand on its predecessor to the extent that it would be of value over the older game, if that is already available.  This title does use the built-in 3DS gyroscope controls and can serve as an example of the technology.  However, many other 3DS titles utilize the gyroscope.

Replay Value:
As mentioned, although the entire game takes under an hour to complete, you only pass through seven of the total fifteen stages in order to do so.  In order to play all of the stages, you will have to earn certain rewards (e.g. a gold medal) or take different routes on the earlier stages.  As a result, those looking to explore all of the stages and earn higher scores will find that this game has high replay value.  However, those who find the game too difficult may not want to keep playing for these reasons alone.  Mastering the game unlocks an “Expert Mode” which will also add to the re-playability of the title – as it unlocks even more medals that can be earned.  The local multiplayer function will also entertain players for hours on end – assuming they can find others to play with in the near vicinity.

Likely Audiences:
Fans of Star Fox and the Star Fox 64 version of this title will find much to love as the game is essentially unchanged from its previous incarnation.  Others who may enjoy it include shooter enthusiasts, people who like short games with high replay value, gamers who appreciate cartoon animals (especially smart-alecky falcons), and those who like light-hearted, yet still difficult, titles.