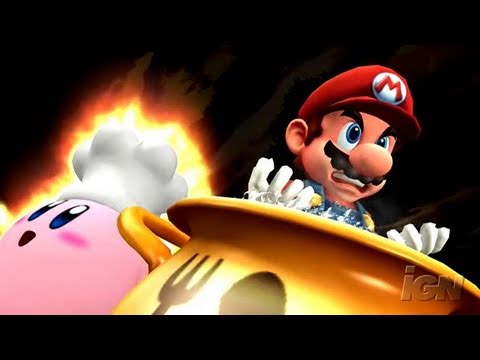 Plot:
Super Smash Bros. Brawl is essentially two games in one: a plot-driven, side-scrolling adventure and an arena fighting game.  The adventure mode, called The Subspace Emissary, incorporates many different characters, such as Mario, Luigi, Link, Pit, Ganondorf, Bowser, Ness, and Kirby.   In this game, the Subspace Army has attacked our loyal heroes and is trying to force the entire world into Subspace, an alternate dimension.  While working to rescue those captured by the Subspace Army, defeat the villains and save the universe, players (up to two at a time) are taken through a variety of different stages and given a choice of a limited cadre of characters – with the cast changing each time a new stage is reached.  The fighting game, on the other hand, pits characters against one another in an arena; only one emerges as the victor.  There are several modes to choose from here and the choices change depending on if you are playing alone or with a group.  The options range from classic mode (where players are forced to fight pre-determined opponents), events (where players try out various challenges to test their skills), brawl (where players are pitted against either human or CPU opponents), and tourney (where players can hold a tournament with up to 32 players participating).

Cultural / Historical Value:
This game has been both critically and commercially successful.  Despite being released a few years ago, this title is still being played by gamers all over the world.  It is a known party favorite, due to its simple gameplay, multiplayer capacity (up to four players in brawl mode), and customizable tournament options incorporating up to 32 players.  By including characters from many notable series (both Nintendo and non-Nintendo affiliates), it appeals to many kinds of fans and has attracted both hardcore and casual gamers alike.

Teaching / Learning Characteristics:
Game designers can certainly learn a lot from this title.  Super Smash Bros. Brawl is a great example of a successful party / multiplayer game.  The single player game, although entertaining, is less remarkable.  Overall, the game has been lauded for its impressive soundtrack, incorporating over 30 well-renowned composers (such as Koji Kondo from Super Mario Bros.) and covering a massive expanse of gaming history.  General gamers can learn a lot about cooperation and competition from the multiplayer and tournament options.

Replay Value:
Super Smash Bros. Brawl has a very high replay value.   As there are 35 characters to choose from, participating in Brawl never gets boring as one can learn to master each character’s skills and attacks. No two matches are alike and skilled players can face off with newcomers, not knowing who will emerge the winner.  Every match can be customized, allowing players to choose which stage to play on, the time of the battle, which items will appear, and so on.  Players can even choose to design their own stages.  Even if you do not have a bunch of friends to battle against, you can find random opponents online.  Further, since not all of the content is immediately available, it propels gamers to play it repeatedly at length.  Various characters and stages have to be unlocked and different trophies, stickers, and pieces of music are awarded as the game progresses.

Likely Audiences:
This title could appeal to almost everyone.  Although there is cartoon violence, it is never graphic.  Nintendo enthusiasts will love this game, as will fans of the many characters that are included.  Fighting game aficionados will find much to love with this title as will casual players.  Anyone wanting a simple and fun game will appreciate Super Smash Bros. Brawl.  Libraries looking to host tournaments will want to include this game in their collection.