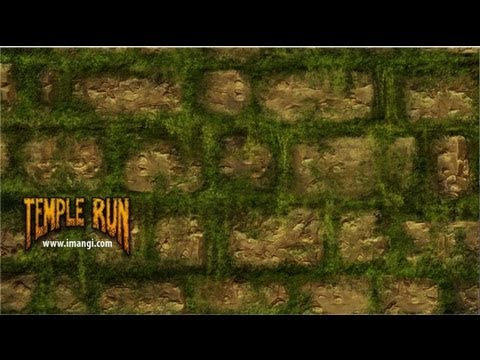 Plot:
Temple Run is about an adventurer who has stolen an idol from an ancient temple and is now running for his life to flee from some evil, demonic monkeys who are hot on his trail.  To escape the monkeys, players must navigate the adventurer on a series of paths and bridges, making sure to expertly turn around corners, slide under obstacles and jump over gaps and other impediments.  All of this is accomplished via the mobile device’s touch controls – swiping left, right, up or down.  The game is also motion sensitive, so that if players tilt the device, the adventurer moves out of the middle of the pathway to either side.  The goal of the game is to run as far as possible without crashing into a wall or other obstacle or running off the edge of a path.  The game does not have levels or a predetermined end.

While running, players will occasionally find random items that will help them increase their score and/or help them run farther.  Along the way, players also collect coins that allow them to buy more items/power ups in the game store.  These coins can also be used to purchase game wallpapers or different characters (of which there are six in total).

Cultural / Historical Value:
Temple Run is an incredibly popular title, having been downloaded over 100 million times in the iTunes app store as of the date of this review.  The Android version has also been popular, with over 10 million installs.  In general, critics gave the game good ratings – praising its graphics and gameplay.  Some criticized the “freemium” nature of the game though, disliking that players can use real money to purchase in-game items.

Teaching / Learning Characteristics:
There is not a whole lot that people will learn from Temple Run.  However, the title is a good introduction to the capability of the iPhone or iPad – with its utilization of the accelerometer and touch controls.  To truly succeed at this game, players do need quick reflexes and Temple Run can help develop those skills.

Replay Value:
Temple Run is an extremely addictive game.  Although each game only lasts minutes, players will feel compelled to try and try again in order to get farther and achieve higher scores.  Players can also unlock achievements via Game Center as well as new items and characters within the game’s store – all of which add to the title’s replayability.

Likely Audiences:
This is not a title for gamers who want complicated, involved titles.   This game is more for those who like fast-paced, addictive, casual titles.  Temple Run is also suitable for those are looking for well-developed free games.