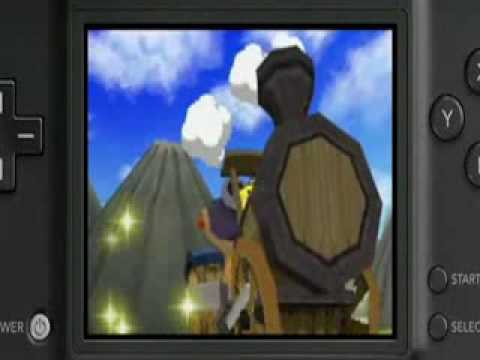 Plot:
The Legend of Zelda: Spirit Tracks occurs approximately 100 years after The Legend of Zelda: Phantom Hourglass.  Once again, the land of Hyrule is under threat.  The demon king, Malladus, is trying to regain power, after having been jailed in the Tower of Spirits. Link, a newly graduated train engineer, and his companion, Princess Zelda, suspect Malladus is up to something.  On their way to investigate, Malladus and his co-conspirator, Chancellor Cole, blow up the Tower of Spirits, attack Zelda, and steal her body so that Malladus can inhabit it.  Link and the spirit form of Zelda then take on a quest to defeat Malladus and Chancellor Cole and reclaim Zelda’s body.

Link and Zelda journey from location to location via a train on pre-laid and pre-determined train tracks.  Players can determine the direction that the train travels, its speed, its whistle, and eventually, its cannon.  Towns and dungeons are traversed on foot. In dungeons, Zelda can possess the body of Phantoms – at which point, the player can control her actions as well.  Many puzzles must be solved by concurrently controlling both Link and Zelda.

Many of the items and weapons encountered will be recognizable to those familiar with Zelda titles, such as the boomerang, bow and arrows, and bombs – but there are also new additions such as the spirit flute (used to play songs), whip (used to hit enemies and swing from wooden beams), sand wand (used to build walls of sand) and whirlwind (used to blow away enemies).

The DS’ stylus controls all game movements, although certain items, such as the spirit flute and the whirlwind, require the use of the built-in microphone.  As was possible with the previous game in the series, Phantom Hourglass, players can “write” on in-game maps to take notes about clues to puzzles.

Cultural / Historical Value:
Spirit Tracks was positively received by both the general public and game critics.  Many copies were sold and the game was nominated for and won several awards.  The title was praised for its inventive gameplay (navigation of the train in the overworld and the utilization of the DS’ microphone), the inclusion of Zelda and the ability to control her character, and its cartoonish cel-shaded visuals.  Some critics noted that the game was very similar to its predecessor (The Legend of Zelda: Phantom Hourglass), but still thought that it was a good addition to the Zelda canon.  Others criticized Zelda for her stereotypical girlish behavior rather than typifying the strong female as in the other Zelda titles.

Teaching / Learning Characteristics:
Just like other Zelda titles, Spirit Tracks is full of puzzles that must be solved in order to progress through the game.  The completion of some puzzles requires utilizing both Link and Zelda in concert.  Thus, to succeed, gamers must practice their problem solving skills.  Although, as is expected, players must have quick reflexes and ample dexterity, the game is not just a simple controller / screen interaction.  The DS microphone in used in innovative ways (requiring players to yell or blow into the microphone at different times) and thereby teaches gamers new ways of experiencing games in general.  Game developers can learn from this as well.

Replay Value:
Completing the main quest of the game takes between 15-20 hours.  However, players can log much more time working on the side quests and challenges.  Outside of the main plot, gamers can collect stamps in a passport, trap rabbits for a sanctuary, deliver goods from town to town, and locate secret treasures.  Finishing these quests awards players with extra heart containers, new sections of train tracks, and special items.  Collecting certain items allows gamers to upgrade and customize their train.  All of this, along with the multiplayer option, gives this title plentiful replay value.

Likely Audiences:
This game is appropriate for all audiences. Zelda titles are never known for being violent and this title is true to form.  Obviously, Zelda fans will appreciate this title – particularly those who enjoyed Wind Waker and Phantom Hourglass as this game built off of those titles’ storylines.  Being a handheld game, the title does lack length and complexity found in other PC and console titles. However, it still may appeal to some hardcore gamers.

Series
The Legend of Zelda