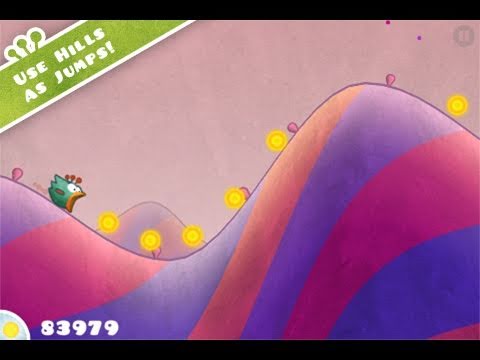 Date of Review:  May 22, 2012
Format Reviewed:   iOS
Language / Country of Origin:   English / USA
Online Capability:  The game is linked to both Game Center and Open Feint (social gaming networks) where users can connect to friends, look at leaderboards and view their achievements.
Equipment Needed: None, apart from iPhone or iPad
Maintenance Required:  None, apart from random game updates

Plot:
Tiny Wings is about a bird who has problems flying properly, due to its tiny wings.  In order to travel, the bird uses hills and valleys to gain speed and momentum and fly.  The goal of the game is to score as many points as possible and help the bird reach the farthest island that it can before the sun descends and nightfall hits (at which point, the game ends).  Gameplay is incredibly simple.  Touching the screen makes the bird tuck in its wings to slide down hills and/or descend toward the bottom of the screen.  When players stop touching the screen, the bird flaps its wings.  With enough speed, gained from sliding down hills, the bird can fly.  Players will earn more points and travel farther if they can maintain speed and momentum, by timing their jumps correctly.  Points are accrued by performing perfect slides down a hill, collecting coins, and jumping high enough to touch the clouds.  If certain objectives are met, players are rewarded with a new nest that grants them a permanent point multiplier – meaning that items will forever yield more points than they did previously.  Although the topography of each world in the game remains the same, different backgrounds and colors appear each time the game is played.

Cultural / Historical Value:
Tiny Wings earned good reviews and was overall very well received by critics.  It was applauded for its simplicity and bright, stimulating visuals.  The game was a major commercial success, having been downloaded several million times.

Teaching / Learning Characteristics:
Although the game has very simplistic gameplay, Tiny Wings does have something to teach players.  Due to the title’s well developed physics, players can learn about gravity and momentum – discovering how speed can be developed through the hills and valleys.  Developers can look to the title for inspiration, to learn how to design a colorful, engaging, addictive game without complicated controls.

Replay Value:
Each game only takes a couple of minutes to finish and thereby compels players to keep trying to beat their previous scores.  In order to earn permanent higher score multipliers, players need to complete in-game challenges to upgrade the bird’s nest.  Gamers that connect to either Game Center or Open Feint can find additional achievements that can be unlocked.  All of this gives the game high replayability.

Likely Audiences:
The game is appropriate for all audiences, as it is completely non-violent and has super simple gameplay.  The game is full of cutesy visuals that will appeal to almost everybody.  Hardcore gamers who like complex controls and involved plotlines may not be impressed, however.  Yet, casual gamers will enjoy this title as it is a perfect for pick-up-and-play since each game can be completed in just a few minutes.