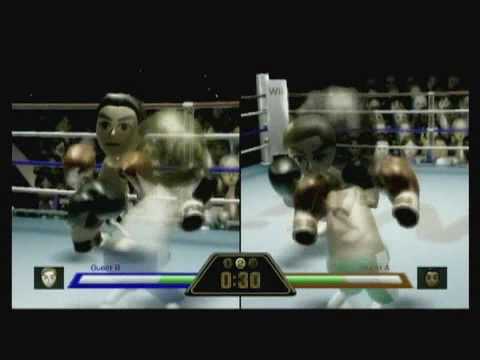 Date of Review:  November 4, 2012
Format Reviewed:   Wii
Language / Country of Origin:   English / USA
Single or Multi-Player:  Single- and Multi-Player (up to 4 players, both cooperative and combative)
Online Capability:  None.
Sequels: Wii Sports Resort
Featured Characters:  Players create their own avatars, called Miis, which are used in the game.  Other in-game characters are generated from the Wii’s Mii Channel.
Equipment Needed: None needed
Maintenance Required:  None required

Plot:
Wii Sports, as the title suggests, is a sports game that is available on the Wii.  The game was built to highlight the motion sensor capability of the Wii.  Players use the WiiMote and Nunchuk to mimic the actions required to play various sports – in this case, tennis, golf, baseball, boxing and bowling.  For example, to play Wii tennis, players must move the remote like they are swinging a tennis racquet.

Players select which sport they want to play and then are given options to play the game alone, with others (multi-player mode) or to enter training mode (practice mode).  If tennis is selected, players play a doubles match (even if they are playing a single-player game).  They are responsible for accurately hitting the ball, but not running to the ball’s location on the court.  The artificial intelligence of the game controls that aspect of the game.  If golf is selected, players can choose to play either a 3-hole or 9-hole course.  If baseball is selected, players play a three-inning game where they are responsible for batting and pitching.  The artificial intelligence of the game controls catching, fielding and base running.  If boxing is selected, players participate in 3-round boxing match.  If bowling is selected, a 10-frame game is played.  Multiple remotes are required for multi-player tennis matches but not for multi-player golf or bowling tournaments.  Most multi-player games pitch players against one another, apart from tennis, where players can choose to either battle one another or play on the same team.

During single-player games, players’ skill levels are calculated and they are awarded points based on how well or poorly they perform.  Once 1000 points are accrued, players are considered a “Pro”.  This is the highest level that can be reached for each individual sport.   Players can also test their skills during the once-a-day fitness test that is offered in Wii Sports.  The game calculates the player’s fitness age (which ranges from 20 to 80 years old) by forcing them to partake in three randomly chosen mini-games (selected from the training database) and measuring their skill, balance, speed, and stamina.

Cultural / Historical Value:
When it was originally released, Wii Sports was sold with the Wii console – not as an individual game.  The game was intended to help demonstrate the capability of the Wii, showcasing how players can move the remote to mimic on-screen actions.  Wii Sports was welcomed to relatively good reviews from critics and gamers alike and received several awards from the gaming community.  Although the game was praised for its intuitive gameplay, interactivity and multiplayer features, several people found the graphics to be too cartoonish and outdated and others thought that the title in general was too simple and lacked depth.   Overall, the game was incredibly popular and was well-used during social events, such as parties and gaming competitions.  It was developed so that anyone could play; both gamers and non-gamers could immediately pick up a controller and figure out what to do.  Wii Sports opened up videogaming to whole new sectors of the population as it reached people who had not played videogames before.

Teaching / Learning Characteristics:
There is not a whole lot to be learned from this game, apart from basic motor skills and hand-eye coordination.  However, the game has been used by some hospitals to help rehabilitate patients with limited mobility to good effect.  Similarly, there are numerous accounts of seniors using the game to help keep them active.

Replay Value:
Wii Sports has very high replay value.  The game is structured in such a way that the more you play and the better you become at the various sports, the higher your in-game skill level becomes.  This compels players to keep playing to get higher and higher ratings to eventually become a “Pro”.  Some people simply enjoy the exercise and fun of physically interacting with the game and will keep playing for that reason alone.  Of course, it is also a fun party game that can be brought out when friends are over – for some great entertainment.

Likely Audiences:
This game is appropriate for all audiences, whether young or old, familiar with videogames or not familiar with videogames.  You’d have to have a heart made of stone to not get any enjoyment out of this title.  Players will have fun creating and watching an electronic version of themselves trying to bowl a strike, knock out an opponent, drive a golf ball onto the green, hit a home run or serve an ace.  Players will also enjoy competing against their friends or enemies with the multiplayer options, watching each other make fools of themselves with the motion controls.  People looking for a good multiplayer game to use in tournaments and other competitions should consider this title.  Those who do not want to use a workout video but don’t want to hit the gym might try using the boxing portion of this game to work up a sweat.  Similarly, parents who are trying to get their kids off the couch might have more luck getting their kids to exercise with this game than trying to force them outside.  Doctors and nurses who want to find new ways to engage their patients in physical therapy may want to give this game a look.  Overall, although the technology used in Wii Sports is no longer new and innovative, it is still a great game.